I went to a comic book shop in St. Louis today and stumbled upon the coolest toys I've ever seen in a gumball machine. They are South Park figures that have heads like plastic Easter eggs with a body that attaches. They cost a dollar a piece and you don't know which one you are going to get. I paid four bucks and got Cartman, Token, and duplicates of Wendy. I was pissed I didn't get Kyle, but that is life. The complete set includes Cartman, Kenny, Kyle, Stan, Butters, Wendy and Token. I only saw one listing of them on eBay. Apparently they were made by Tyco in 2011. If I ever go back to Star Clipper I will pick up more. 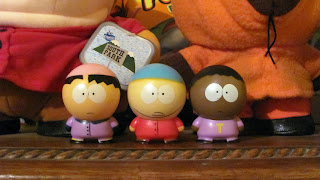 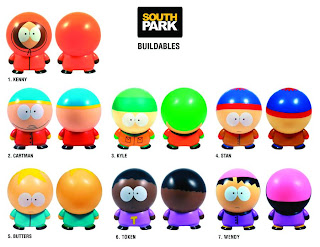 The season premiere of South Park, entitled "Reverse Cowgirl", also aired tonight. It was strange and nothing groundbreaking, but I laughed a few times. Especially when Gerald was getting his ass wiped, saying "I'm a big boy." I enjoy poop humor. But the show has been on for so long I feel like every episode is starting to become the same. That is destined to happen to any show that has been on sixteen seasons though. By the way, why the fuck did they change Clyde's mom's voice? I really wish they'd quit changing voices around. I hate inconsistency. But they've been doing it for a long time so I guess I should get used to it.