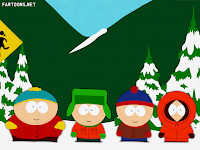 My undying love for goes all the way back to its first season in 1997. I didn’t have cable but I stumbled on to the show one night at my grandpa’s house. I laughed so hard I cried but I had no idea what the hell I was watching. It wasn’t until early 1998 that I saw pop up again with a bunch of merchandise at Spencer Gifts. That is how I learned the name of the show. was just becoming huge in my town in early 1998. The second episode I watched was “Not Without My Anus”. I tuned in to see who Cartman’s father was because it was a big deal at my school. Instead of revealing the answer they aired an April Fools episode with Terrance and Phillip. I thought it was a great. After the new episode they aired the Halloween episode “Pink Eye” that I saw for the first time. I tape recorded them and watched the VHS over and over. I didn’t get to see the show again until “Ike’s Wee-Wee” aired two episodes later. After that I began my obsession of tape recording it at my grandpa’s every week. I never missed a new episode when it aired.

My favorite character was Kyle. I remember me and my mom driving around to malls trying to find the Fun-4-All Kyle plush. All the plushes were sold out everywhere. My dad lived in at the time and ended up asking the worker at Spencer Gifts to look in the back for one. They actually had one left and I found it sitting on my couch when I got home that night. It was my first piece of official merchandise. I went on to collect around 500 pieces of memorabilia through the years.

Trey Parker and Matt Stone were my heroes. They influenced my sense of humor at the age of 13. Their idea of “make fun of everything or make fun of nothing” has stuck with me to this day. If it weren’t for their work I would have turned out to be an entirely different person. Honestly, I don’t know if that is a good or bad thing. All I know is they got me into writing, shitty animation and doing voices.

When the movie came out in 1999 it was epic and a huge memory for me. I was so damn excited for it to be released. I still remember the entire day of the premiere on . My dad took me to see it on the big screen and it was glorious. When it came out on video I watched it every single day. I remember sitting in school eagerly waiting until the bell rang so I could go home and watch it.

When my grandpa died in 2000 watching the show never felt the same. I still watched it at my grandma’s house but it was less magical without him sitting in his chair making a comment or chuckling at a joke now and then. The golden age of for me was 1997 through 1999. Those are the best memories. Probably because I was young and the world hadn’t lost its magic yet. But I have continued to love it all of these many, many years later.
Posted by Ry Guy