I think I am ready to count down my five South Park seasons of all-time. My choices don't mean other seasons don't have as good of episodes, I am judging on the greatness of the seasons as a whole. My list is probably very different than most people's would be, so it will really not be helpful to you at all. That is what we do here. Try to not help you in any way, shape or form. You're welcome. Now on to the counting. 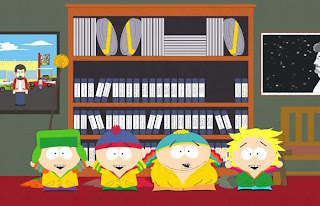 Season five felt kinda of plain and boring to me looking back on it. I loved it all the same, but I think season six had so much more going on. Butters took over Kenny's role of the fourth group member leading to a new contrast in character. Everything felt much quicker than the previous season. It almost had a new feeling to it like season one or two. The first half of episodes was especially great. This was when they still had new episodes airing during the summer too. I loved that and miss it. Back then you got new South Park's for every season of the year. It gave each batch of episodes a different feel and it was awesome. I missed Kenny this season and was stoked when he came back. I just think the show needed a somewhat different formula to keep fresh. I kinda wish they had kept the dead Kenny story going for a while. It was really fun.

Season four was an extremely memorable season for me. It was the year my grandpa died and he always watched the show with me at his house because I didn't have cable. It was never the same after he died, of course. I have sort of mixed emotions about season four. The boys entered the forth grade and it signified change. Change that I was also going through as well. It was one of the first times I noticed South Park beginning to feel different. It wasn't necessarily a bad different, but really, different is never too great for me. The Fourth Grade Years was super sweet for the most part. I really liked them all except "Helen Keller: The Musical". When Timmy first hit the air in spring of 2000 in the episode "The Tooth Fairy's Tats 2000" I thought it was hilarious. Then kids at school started quoting him all the time. I thought to myself, "Wow, this is annoying. I really hope they don't bring him back and overuse it." Then soon came Timmy's very own episode that I wasn't too stoked on. I felt very protective of the four boys and felt Timmy was taking the spotlight away from them. To this day I still don't care for Timmy episodes. Especially since they quit just making him a retard and started to show he really understands what is going on. I prefer him just being a retard. Retarded is funnier.

Season three started out perfect with "Rainforest Schmainforest" and "Spontaneous Combustion". Then once episode three hit I remember Comedy Central having technical difficulties with their station. The color on the TV was all fucked up and they had to postpone episode four until later in the summer. "The Succubus" was an all right episode, it just marked the ACTUAL first time I felt a change in South Park for some reason. Maybe it was because Trey and Matt were getting burnt out from doing the South Park Movie. The episodes that summer during the movie's release just seemed mediocre. But the movie itself was so great it made up for anything the TV show was lacking. Seeing the movie in theaters was one of the most enjoyable moments I remember as a kid. Then when more new episodes aired that fall they felt different too. Maybe it was just me who was changing. Who the fuck knows. Either way, it made my top five list so it had to be a great season.

I get goose pimples just thinking about season two. A lot of people got burnt out on the show around this time but it was just when I was really starting to get into it. I tuned in with everyone else to see who Cartman's father was and was treated to half an hour of farts by Terrance & Phillip instead. I thought it was hilarious and I quoted it every single day for like six months. There really isn't one episode I can think of in season two that isn't perfect. Cartman's voice was at its greatest; all of the voices were. It is really hard for me to compare any season with season two. I think it may have been the high point of South Park. A lot of it was just timing in my life. Strange how that works out. It made just a really memorable year for me in general.

Ah, season one. When everything was still so new, fresh and magical. This was probably one of the greatest times in my life, and definitely the most I've ever laughed. The animation was so crappy it was perfect. I loved how bad the animation was. It made it feel different. Today the look doesn't feel much different from anything else on television. It evolved a lot, which is what shows are supposed to do. Still, can't get enough of those cutouts and the limited computer animation. I will never fully accept the look of the show since 2001 when they changed from Power Animator to Maya. The textures just haven't been as bright and beautiful. Here they were so crisp. It was like you could reach out and touch the construction paper. Memories.

I also think season one just hit me at the right age (or wrong, which ever way you want to look at it). I felt so rebellious watching it. I felt like it was something that was mine and no one could take it away from me. Of course, my mother could have at any time. And she often threatened to. She never had the heart to do it though, which I thank her for. My first official South Park memory was watching the episode "Death" and laughing so hard my grandpa came in the room and said, "It sure is good to hear you laughing again". I was going through rough times. I always have been. But South Park was there for me and still is to this day.

Top 5 Episodes of Season One: