Ryan's Top 10 Video Games (That You Won't Agree With)

I have never been a typical gamer. In fact, I am not a gamer at all. And I am proud of that. There are too many gamers out there these days. It's not even cool to be one anymore. You hear that? You're NOT cool! I stopped losing interest in gaming systems after Nintendo 64. Everything just got to complex and 3D. 2D will always be better than 3D, it is not just limited to movies. I grew up loving games based on cartoon shows. In fact, there is only one game on here that is not based on a cartoon. So fuck The Super Mario Bros. and faggot Zelda, this is the real deal right here. The choices for people with real taste. If you are a typical gamer I warn you not to venture any further. These reviews are going to be terrible since I haven't played any of these games in forever. 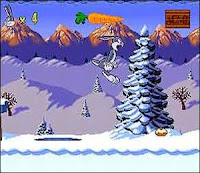 This game was based on the not-so-popular classic Looney Tunes short "Rabbit Rampage" directed by Chuck Jones. Unsurprisingly, Daffy is the master boss hand-painting cartoon obstacles in Bugs Bunny's way. Even for today, I think the sprites are fan-fucking-tastic. One of the best of any Looney Tunes game. The levels are fun with bright pretty colors and everything is true to the original cartoons. Though I do recall the controls kinda sucking and Bugs walking too slow. It was not the kinda game I liked playing over again once I beat it.

This game is actually pretty terrible. All right, I admit it. It's incredibly terrible. The graphics bother the fuck out of me because it doesn't look enough like the actual cartoon. The mini games are boring and the questions are so fucking hard and stupid you can only get them right by memorizing them. But whenever my friends came over they enjoyed playing it instead of the other two South Park games I owned. I don't know why. They were fucking stupid. This game sucks ass. The only thing in it true to the show is the voices. The reason it is on my list is because it is South Park. Come on. 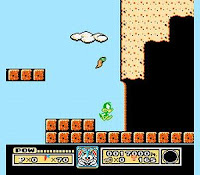 This game was tons of fun as a kid. It was fun to play and watch. I've beaten it so many times I lost track. And yes, I am talking about masturbation. The best part is you get to play as Furrball. I always wanted to play as Furrball even when it was more convenient to play as other characters. Fuck Buster Bunny and Dizzy Devil. Furrball is fucking awesome. If you played as anyone else you can lick my hairy scrot. I got this game for my birthday one year because I was the cat's meow. That's right. I was Furrball. Fuck you. 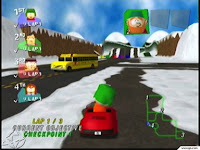 Fuck Mario-Kart. This game is like one-thousand times better. People always bitched while playing it because it was "too hard". That's why you have to play it so much you learn to make it not quite as hard, but still difficult. Mario-Kart is for stupid people. This is the best racing game ever created. Fuck you with the Mario-Kart. This is South Park. There is cursing, farts and you get to play as Kyle. Top that Luigi, you Italian fuck.

I beat this game in like two days. That is how easy they make games now. But it was still pretty cool to play. Especially since you get to unlock a Duck Dodgers costume. Pretty fucking sweet. Made me pop a fatty. Nothing wrong with that. They should have made more playable characters, but what game ever makes enough playable characters? None that I've encountered. So don't consider it a complaint about the game. Consider it a complaint about video games in general.

YES! This game was so much fucking fun. I used to rent the Sega system from the movie rental store because I was too poor to afford my own. And I fucking wanted to fuck this game so hard. The graphics were amazing. So true to the show. Did I mention Mario sucks? Only flaw in this game is you have to play as Buster. I really wanted to play as Furrball. You really fucked me this time Sega. Even on NES you could play as Furrball. Change the game to Furrball's Hidden Treasure and we got us a hit on our hands. 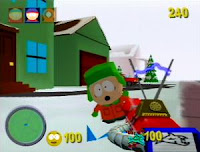 This game gets a lot of bad reviews. I understand why, but it was still a lot of fun for me. Just because it was South Park. That's the only reason you need. Yes, killing turkeys for three hours is kind of lame. But at least you're doing it as Cartman. The plot? Fucking stupid. If Trey and Matt wrote it the game would have been a lot better. But no one can really write South Park but them. Multiplayer was always fun as fuck for me, but no one ever wanted to play with me for more than five minutes. My friends fucking sucked. I'd love to play it on PC right now but no one is ever on the server anymore. I only got to play it online a few times. But the times I had were pretty great. So many great character options. More so than any other game I've played.

I used to sit at my friend's house playing this game for hours and hours. It was fucking sweet. Not the game's story, that was fucking stupid. I just liked to go around shooting people and jumping out of planes from the highest point I could reach. I never actually played the game how I was supposed to. The best part was going in the police station and killing cops. It eventually got kind of old. But it is still one of the best games I've ever jerked off to.

No, you didn't read that wrong. This game is fucking sweet. Mostly because I'm so good at it and I love playing as the same characters each time (Furrball, Calamity Coyote, Little Beeper, and Buster). I always make Buster be the goalie because he sucks the most. Honestly, I don't know why this is my favorite game. It just is. Live with it. I try to. It gets hard sometimes but I get by. They need to make a new Playstation game based on Furrball. I would use my dick on the controls instead of my hands. That's how awesome that game would be. Do it Playstation. Enough Spongebob Squareshit and "Madagascar" the fucking movie. It is time for Furrball: The Game.

And that is the only game review I will ever do ever.