South Park: Year of the Fan

South Park Studios just posted a press release on "South Park: Year of the Fan", honoring fifteen years of South Park with fan-driven events at Comic-Con, an upcoming behind-the-scenes documentary, and new merchandise this fall. Why they are deciding to release this information in mid-July is beyond me. Here are some of the things listed that we have to look forward to:

• The Ultimate "South Park" Fan Experience at Comic-Con, San Diego: Fans will walk into a 15,000 square foot world of "South Park" located just outside of the San Diego Convention Center. The Ultimate Fan Experience will include:
– A museum with "South Park"-inspired artwork by Ron English and other curated artists on display (see below), including fan-submitted artwork chosen by English as well as South Park staff artwork
– Famous "South Park" memorabilia, including the gown Matt Stone wore to the Oscars in 2000 and the original cut-outs and story boards from the early seasons of the show
– A life-size replica of South Park Avenue
– Interactive stations with social networking uploading capabilities, including a Create Your Own Avatar station, South Park photo booth and a Face Painting station featuring famous South Park characters including Mitch Connor
– A Big Wheel pedal racetrack
– A school cafeteria where Cheesy Poofs will be given away!
– A Voice of the Fan confessional booth where South Park will interview the fans about their favorite South Park moment, challenge them to sing the Cheesy Poof song or the South Park theme song. The best recordings may be used on COMEDY CENTRAL, South Park Studios.com or on the upcoming Year of the Fan DVD.
– An MCd center stage with South Park karaoke, costume competition, trivia contests and more!

• "South Park" Documentary: Viewers will get an exclusive inside look into the making of a "South Park" episode. A documentary crew was given an all-access pass to Stone and Parker's world at South Park Studios in Los Angeles. The documentary will air on COMEDY CENTRAL this fall. COMEDY CENTRAL Home Entertainment will release the directors cut of the DVD in November with new footage and bonus episodes from the 15th season and fan-interactive opportunities.

• Cheesy Poofs: "South Parks" iconic snack will hit the market for a limited-run this fall in Wal-Mart stores nation-wide.

• Art Exhibit: 15 Artists Interpret South Park curated by famed street artist and pop surrealist painter, Ron English, opened on March 28 at Opera Gallery in New York City. English hand-picked 14 artists drawn from the street and the pop surrealism movement to join him in displaying their "South Park" interpretations, making that a total of 15 artists in honor of South Parks 15th season. Unified by their love of the hit series and the passion they brought to their work, their art features the "South Park" characters and the iconic moments throughout the series history. The exhibit will also be displayed at the Ultimate "South Park" Fan Experience at Comic-Con.

• SouthParkStudios.com finds the ultimate fan with the new "South Park Pop Quiz," developed by SMERC. Fans can challenge friends and compete with other fans around the world in the ultimate "South Park" trivia contest to prove their South Park IQ.

I must say, the South Park Exhibit at Comic Con does sound like every fan's dream come true. Maybe if they had promoted it sooner I would have actually gone. Of course they release this information after all Comic Con badges are sold out. Thanks a lot Comedy Central. Excellent timing, as always. The new South Park documentary also sounds pretty awesome. I hope they go in depth on the process of creating an episode with actual footage. I read about the process all the time but they rarely actually show it in action.

I don't get why they are acting like this is the first time they have produced actual Cheesy Poofs. In 1998 they were sold in Spencer Gifts shops all around the country. And the packaging actually looked like it does in the show, with a bonus character picture on the back of the box (I chose Kyle!). What is with the new Cheesy Poof packaging? It looks nothing like it does on the show. But it is still pretty cool I guess. 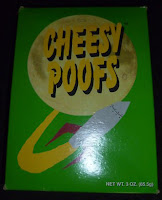 Here is a first glimpse at the new Kid Robot Dead Kenny figurine that will be released on July 21st: 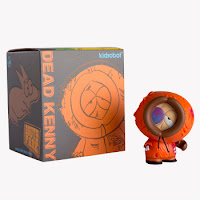 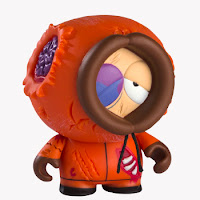 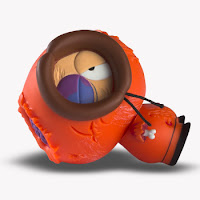 As far as the new Mezco South Park figurines go, all I could find are re-issues of the old series. The only difference I see in this set of the four boys are their smiles and the packaging. They are making mini versions of these figurines as well which were not previously released. 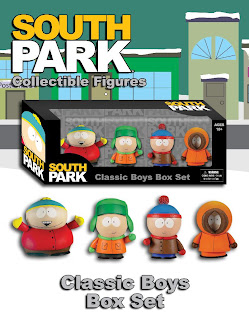