Congratulations to South Park for its eleventh Emmy nomination for this season's episode "Crack Baby Athletic Association". It was my second favorite episode of the season but a strange choice to submit. I wonder if they submitted it as a joke. They have so many damn Emmy awards I doubt they care anymore. But I still hope they win because even the worst episodes of South Park are still better than anything else on television. So let's take a look at all the Emmy-nominated South Park episodes over the years. 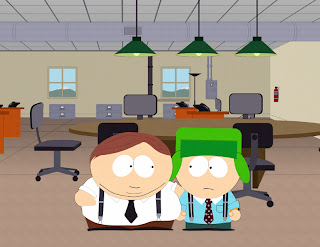 Outstanding Animated Program
"Crack Baby Athletic Association"
Cartman has a new protege. He's found someone who is smart, ambitious and willing to look the other way in order to get to the top. Kyle is brought in on the ground floor of Cartman's latest business venture, the Crack Baby Athletic Adventure.
2010 Emmy Nominee 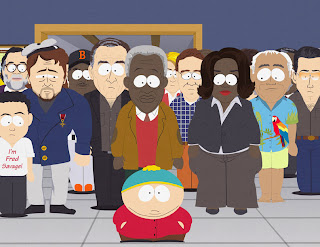 Outstanding Animated Program
"200/201"
It’s a tense situation in South Park as Muhammad has become the pawn in the game to save the town. The Ginger kids are threatening to destroy the city if Stan and Kyle don’t hand over the Prophet and the celebrities have met violence with violence by unleashing Mecha Streisand. In the midst of all of this, all anyone really wants to know is, who is Eric Cartman’s father?
2009 Emmy Winner 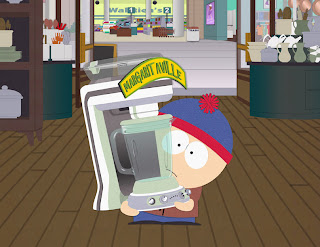 Outstanding Animated Program
"Margaritaville"
Randy steps forward with a solution to fix the desperate financial state everyone finds themselves in. The town gets behind him and everyone starts to live a life that no longer depends on any economy at all. Meanwhile an unlikely savior makes the ultimate sacrifice to solve everyone’s problems.
2008 Emmy Winner 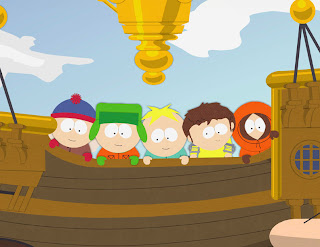 Outstanding Animated Program
"Imaginationland"
The doors of a whole new dimension are thrown open and the boys of South Park walk right on in. Finding Cartman’s leprechaun is just the tip of the iceberg when the boys are about to have the entire contents of the world’s imagination laid before them. The boys realize that what they know has become a valuable commodity to the U. S. government. Meanwhile, Butters is about to become collateral damage.
2007 Emmy Winner 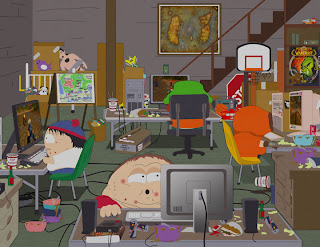 Outstanding Animated Program
"Make Love, Not Warcraft"
The boys come into contact with a gamer who doesn't play by the rules. Even the creative people behind World of Warcraft don't know how to stop the renegade. They are forced to put all of their hope into the hands of the kids of South Park. The boys dedicate their lives to defeating the mad gamer and saving the game for all.
2006 Emmy Nominee 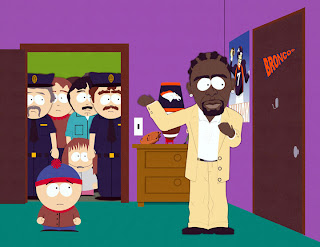 Outstanding Animated Program
"Trapped in the Closet"
The results of Stan’s personality test reveal that he’s depressed. While Stan looks to a new religion for answers, the church leaders recognize Stan as the second coming. Some A-List Hollywood celebrities join the faithful who have set up camp right in front of Stan’s house.
2005 Emmy Winner 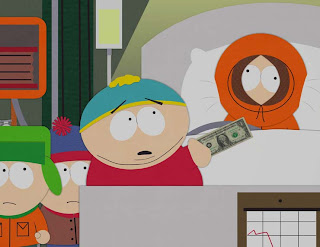 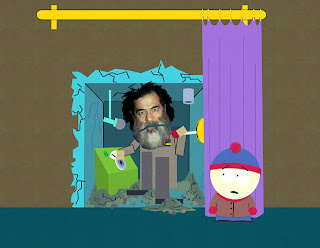 Outstanding Animated Program
"Christmas in Canada"
The Brovlofski family is dealt a devastating blow when Ike's Canadian birth parents show up unexpectedly and want their baby back. When the townspeople decide to forego their Christmas gifts and take up a collection to get Ike home to South Park, the boys are distraught. They hightail it to Canada to bring Ike home themselves before all the money for their Christmas presents gets spent.
2002 Emmy Nominee 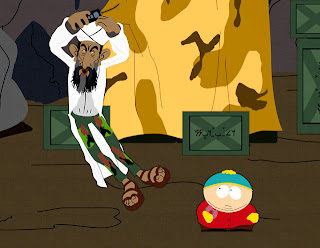 Outstanding Animated Program
"Osama Bin Laden has Farty Pants"
Filled with the American Spirit, the children of South Park Elementary have all sent their dollars to the children of Afghanistan. When the boys receive a package from the kids they sent the money to; personnel from every government agency descend upon the town to investigate. As a result, Stan, Kyle, Kenny and Cartman are forced to return an Afghani goat to its homeland.
2000 Emmy Nominee 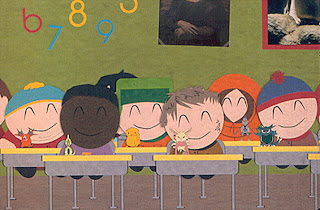 Outstanding Animated Program
"Chinpoko Mon"
Stan, Kyle, Cartman and Kenny are caught up in the latest fad from Japan: Chinpoko Mon! In their effort to collect everything Chinpoko Mon, all the children in South Park have become fanatics. Meanwhile, the Japanese toy manufacturers have hidden anti-American messages in all their products, thereby enlisting the children throughout the U.S. to aid in completing their Primary Main Objective: bombing Pearl Harbor.
1998 Emmy Nominee 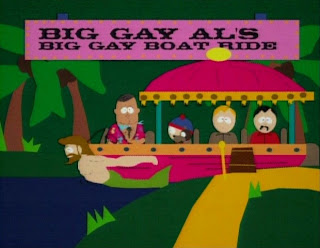 Outstanding Animated Program
"Big Gay Al's Big Gay Boat Ride"
The big homecoming football game pits the South Park Cows against their arch rivals, the Middle Park Cowboys. Uncle Jimbo has convinced the rest of the town to bet heavily on his nephew, Stan, the star quarterback, to beat the sixty point spread. But when Stan discovers his new dog, Sparky, is gay, he becomes so confused he loses his will to play in the big game. A mysterious and magical new friend, Big Gay Al, helps Stan understand the wonders of being gay and sends Stan back into the game.
- Ryan
Posted by Ry Guy