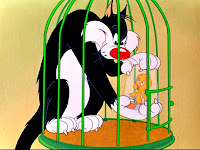 I've been watching a lot of Sylvester and Tweety cartoons lately. I've realized I'm so Gung Ho on Chuck Jones' work I never really took as much time to appreciate Friz Freleng's cartoons. He is probably my second favorite Looney Tunes director. I especially love his style from the mid-forties through the early fifties. His characters get rather stiff in the late fifties, and even a little bit in the early fifties. I'm not too crazy about his later Bugs Bunny, but his Sylvester and Tweety cartoons are amazing. Tweety is such a little sarcastic bastard I am always rooting for Sylvester to sink his fangs into that fat yellow head. 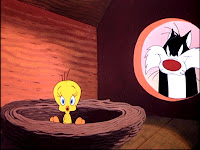 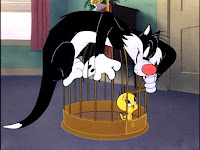 My favorite Sylvester and Tweety cartoon is "I Taw a Putty Tat" from 1947. It is one of the few cartoons where Tweety wears his stupid little blue hat. I'm not a big fan of Tweety but he is pretty funny in this cartoon. Probably because he does more than have stupid one-liners.