Today marks the fourth anniversary of the loss of my best friend and most beloved pet for fifteen years, Blacky. She was literally the greatest cat in the world. I love all cats but I've never encountered one quite like her. She had such a unique personality it was almost as if she was human. But I loved her more than I could ever love any human. Unfortunately, I wasn't around much the year prior to her death because I had moved away. I really wish I had been there to spend more time with her. But when I was home she always rushed to give me love. She never forgot me, even when I was away for months at a time. She was my loyal companion till the end. 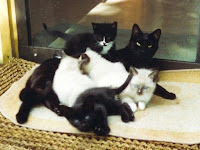 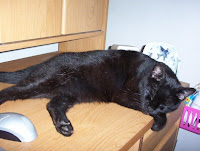 I was in third grade when I first encountered Blacky, and it happened to be on Thanksgiving at my grandparent's house. There were two cats outside starving for food and attention so my sister and I fed them turkey. We thought they were strays at the time but later found out they lived across the street. Of course, this was years after we had already taken them in. We named the two young cats Blacky and Zebbie. They both had kittens soon after we gave them a home. I remember coming back from the bowling alley with my dad to find both cats had given birth under a bush by our front porch.

Blacky was a wonderful mother. She rarely left the kittens' sight. Not only her kittens but Zebbie's as well. We ended up giving away most of the kittens and two of them ran off; Corky and Furby. Soon after Zebbie ran off as well. This was one of the first times I remember being devastated. I went looking for her in the woods but never found her. Blacky, on the other hand, stayed around for her whole life. We loved her like a member of the family. If she was ever missing for very long we'd go search for her, even in the rain. Luckily she always came back. Except for on June 12, 2007 when she never returned.

Blacky had gotten diabetes the year before she died and was getting very sick. I remember when she first got sick my mom and I took her to the vet. I was terrified because I knew her time was running out. But when I heard she died I didn't even cry for some reason. It wasn't shock. I wasn't surprised she had passed. I was expecting it. I envisioned myself becoming hysterical if anything ever happned to her. But for some strange reason, I didn't even cry. I think it was because life had changed so much and I was already going through such a terrible time that nothing really affected me anymore. But about a month later when I finished making a video in her memory I finally cried.

I created a cartoon version of Blacky for my animated TV series pitch Senioritis. The scripts are about my life so it was only fitting I included my best friend. But I was drawing cartoons of Blacky long before Senioritis. She was even in my first hand-drawn animation from 2006, the award-winning "Winner Takes Brawl".

I love and miss you so much Blacky. You were everything I could ever ask for in a best friend. You mean the entire world to me. I can only hope that somehow we will be together again one day. I will never forget you. 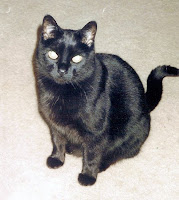 A Few of Blacky's Favorite Things:

Email ThisBlogThis!Share to TwitterShare to FacebookShare to Pinterest
Labels: Cats